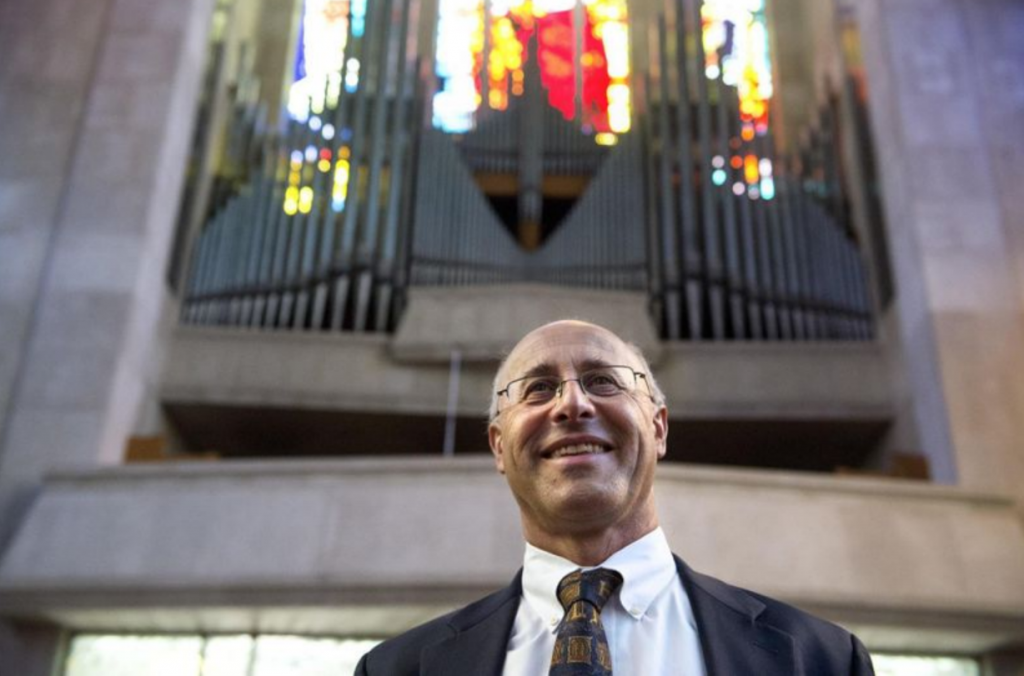 Ezequiel Menéndez has been the music director and the organist at the
Cathedral of St. Joseph in Hartford for the past 20 years. The Austin organ, in
the background, that he plays, contains more than 8,000 pipes. The largest
“sub principal” pipes are 32 feet long and had to be installed by crane before
the roof was put on, after the cathedral was rebuilt. (PATRICK RAYCRAFT |
praycraft@courant.com)

Before a Bach concert at Harvard University, Ezequiel Menéndez asked a
former organ teacher to critique his rehearsal.

Menendez has a doctorate in music and has worked for decades as a
professional organist, but always strives to improve. His mentors say his
strong work ethic, dedication and talent help him stand out from his peers.

Menéndez, 53, of Avon, has been the music director at the Archdiocese of
Hartford’s Cathedral of St. Joseph since January 1998. He judges
international organ competitions, teaches and performs as an organist with
Hartford Symphony Orchestra.

He’s known among other musicians for his ability to play a wide range of
music well and to be technically perfect with a complex instrument.
Regardless of the piece, he’s known as a musician able to make the organ sing
with feeling.

“Able organists are admired because they are capable of quickly finding more
colors, more nuances, and more subtleties on each specific instrument,” says
Gabriel Löfvall, a conductor, pianist and tenor. “Ezequiel is one of those
performers who truly makes the organ speak at many levels, with different
voices and personalities.”

Menéndez, a Roman Catholic, views his playing as a type of ministry.
“I enjoy playing in church. It’s kind of my connection to God,” says the
married father of four. “I think there is something beyond the music when I
play in church.”

When he was very young, he says, someone asked him how he felt when he
finished practicing and went outside. “I remember saying, ‘Everybody’s crazy.’
[There’s] a certain level of peace when you are inside of a big building playing,
even if you are playing crazy, loud music. When you go outside and you see
that people are worried about very small things, and people are yelling at each
other in the streets because of traffic or whatever — my space is right in the
church, practicing or performing or playing for the church.”

After earning his bachelor of music degree in his native Buenos Aires,
Argentina, Menéndez, then 19, was playing in The Teatro Colón opera house.

Organ instructor Shirley King, who was in Buenos Aires on a Fulbright
Lectureship to teach, heard him play in a church concert.
“His talent was just evident immediately,” King recalls. “I later found out
when I gave him some lessons in that same church that the organ was not
nearly as good as it sounded in that concert.”

Menéndez studied with King during her year there, and she recommended he
apply for a Fulbright to study in the United States. His limited English
language skills kept him from getting the scholarship, but he didn’t give up.
When she invited all her Argentinian students to study free with her at Bethel
College in Kansas for nine months, he was one of three to accept.
“He was the most disciplined and eager to learn” she says. “He was not going
to be daunted by not knowing a lot of English. He was a natural-born
organist.”

During a visit to a friend who was studying at Yale University, Menéndez
stopped by Woolsey Hall to see its world-renowned Newberry Memorial
organ. He found someone playing, so he sat down to listen. When that
organist finished, he asked Menéndez to play.

When Menéndez finished, the man said, “By the way, I’m Tom Murray.”
Menéndez says he had listened to Murray’s records but didn’t know what the
internationally acclaimed organist looked like. He was glad he hadn’t known
who he was playing for, he says.
“When I heard him play, I was blown away,” says Murray, Yale’s senior
professor of organ. “He’s just a marvelous musician.”